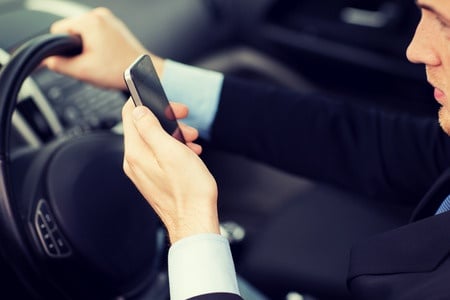 Everybody knows that drinking and driving can have serious and sometimes fatal results, but a less publicized danger is proving to be even more of a hazard on America’s roads: distracted driving. Distracted driving is operating a motor vehicle while also doing other tasks that take your attention away from the road. According to the Center for Disease Control, nine people are killed and around 1,150 are injured every day in wrecks caused by distracted drivers.

Distracted driving falls into three general categories, a driver taking their eyes off the road (visual), taking their hands off the wheel (manual), or taking their mind off the driving task (cognitive), and are caused by things like eating, using in-vehicle technology like GPS systems, or using cell phones. Of these various causes, cell phone usage has quickly become the most prevalent.

Cell Phone Use While Driving

As cellular data plans have grown cheaper and the technology more ubiquitous, it will be of no surprise that the number of cell phone related car accidents has grown exponentially in recent years. Studies by the National Highway & Transportation Administration (NHTSA) has shown that there are close similarities between the loss of control demonstrated by people using cell phones while driving and the impairment experienced by drunk drivers. In these government studies drivers that were texting and driving had the same rates of effective impairment (such as weaving into oncoming traffic, delayed braking, following too closely, and similar instances of driver error) as drivers who had consumed four beers before attempting to drive a vehicle.

In recent years drunk driving fatalities on American roads have dropped by about 25%, but at the same time accidents that were caused by distracted driving increased by 22% for the same time period. In fact the most recent statistics released by the NHTSA report that 25% of all traffic accidents in the United States over the last few years involved one of the drivers texting while driving: over 1.6 million collisions a year could have been avoided if drivers had waited until they arrived at their destination to send a text message.

Changes in the Law

There is no nation-wide set of laws regulating the use of cellular phones while driving, and rules can vary drastically between different states and even cities, so it is a good idea to be familiar with the laws in the areas you will be traveling through. Currently it is illegal to text while driving in 41 states, and 11 states prohibit any use of cell phones while driving at all. Because of the sheer number of accidents that have been occurring, cities and states across the nation have been moving quickly to regulate cell phone use by drivers, so even in areas where it is currently permitted it may not be legal in the near future.

As of January, 2016, texting and driving and operating a handheld cell phone is illegal on the part of any driver. Using a hands-free device is permitted, except in the case of drivers under 18 with a learner’s permit or intermediate license. It should also be noted that these are considered Primary offenses in West Virginia: a driver can be pulled over and cited for them without an underlying cause for the traffic stop.

If you or a loved one has been injured by a distracted driver, our car accident lawyers are here to help.  Contact us today and let our dedicated staff explain how we can get you the compensation you deserve.