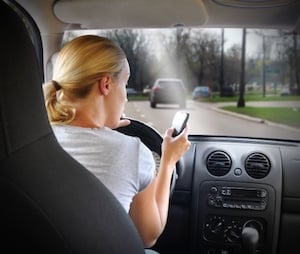 A nation-wide campaign is currently highlighting the various risks associated with texting and driving, in particular the risk of a serious bodily injury from a car accident and in many circumstances death. The premise of the campaign is simple, that driving while distracted is dangerous and can and does often lead to tragedy. A recent story shows how instantaneously texting while driving can actually lead to death. A teenager, while ignoring the pleas of her fellow passengers, continued to text while driving, and in so doing, ended up running a red light and killing herself, the passengers that were with her, and another man along with his 10-year-old daughter.

Although the statistics remain uncertain, the National Safety Council estimates that there are approximately 1,600,000 accidents per year specifically related to texting and driving. In 2013 “3,154 people were killed in motor vehicle crashes involv­ing distracted drivers [and] this represents a 6.7 % decrease in the number of fatalities recorded in 2012 [where] unfortunately, approximately 424,000 people were injured, which is an increase from the 421,000 people who were injured in 2012.”

Other noteworthy statistics that are equally significant include that “10% of drivers of all ages under the age of 20 involved in fatal crashes were reported as distracted at the time of the crash. This age group has the largest proportion of drivers who were distracted.” Additionally, “drivers in their 20s make up 27 percent of the distracted drivers in fatal crashes.” According to the government’s own website that compiles specific distracted driving data, “at any given daylight moment across America, approximately 660,000 drivers are using cell phones or manipulating electronic devices while driving, a number that has held steady since 2010.”

It is important for drivers in West Virginia to be cognizant of the state’s distracted driving legislation, especially since, based on the above statistics, there is a strong likelihood that either you or someone you know may become involved in a car accident as a result of texting or cellphone use. Courts in many states, including West Virginia, recognize that when a particular driver violates a traffic law or engages in explicit prohibited activity, that evidence of such violations, whether through citation or otherwise, can be admissible and demonstrative of a driver’s actual liability. As such, West Virginia drivers should pay close attention to the distracted driving laws in the state, including the state’s effort to focus on “Turn it Off. Put it Down. Just Drive.”

If you or someone you know has been involved in a car accident as a result of distracted driving, you need car accident lawyers with experience in such personal injury matters. Colombo Law is highly experienced in such matters and can evaluate your potential legal claims on your behalf. Contact us for a FREE case review.