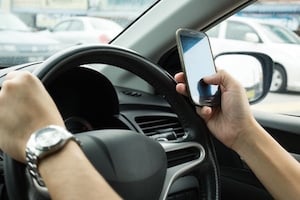 According to a recent report by the West Virginia Department of Transportation, distracted driving incidents in the state comprise a significant percent of automobile accident based fatalities. In fact, another recent report from the Governor’s Highway Safety Program concluded that “electronic distracted driving is probably the No. 1 contributor to crashes in West Virginia.” Additionally, the State of West Virginia has taken a very broad perspective of what constitutes distracted driving, where it may include any activity that could divert a person’s attention away from the primary task of driving such as “texting, using a cell phone or smartphone, eating and drinking, talking to passengers, and adjusting the radio [and] because text messaging requires visual, manual, and cognitive attention from the driver, it is by far the most alarming distraction.”

The Dangers of Distracted Driving

Distracted driving, especially with drivers using cellphone or texting, has become such a significant transportation safety and public health issue, that the West Virginia legislature, in 2013, passed very strict distracted driving legislation, which included in part a mandatory ban on using handheld cellphones while driving, including a very active and high profile advocacy campaign that focused on the slogan “Turn it Off. Put it Down. Just Drive.” The legislation not only bans the use of electronic and handheld devices when driving, but also imposes strict fines, penalties, and even license suspensions for violations of such provisions. Additionally, under such distracted driving laws in West Virginia, and police officer has the explicit authority to stop, pull over, and issue a ticket to any driver involved in such prohibited conduct.

It is important for drivers in West Virginia to be cognizant of the state’s distracted driving legislation. Courts in many states, including West Virginia, recognize that when a particular driver violates a traffic law or engages in explicit prohibited activity, that evidence of such violations, whether through citation or otherwise, can be admissible and demonstrative of a driver’s actual liability. Many insurance policies are now also putting in place difference distracted driving clauses, which may adversely affect your coverage and policies amounts, if and when you are involved in an accident where it is determined that distracted driving was at issue. As such, West Virginia drivers should pay close attention to the distracted driving laws in the state, including the state’s effort to focus on “Turn it Off. Put it Down. Just Drive.”

If you or someone you know has been involved in a car accident as a result of distracted driving, you need a car accident lawyer with experience in such personal injury matters. Colombo Law is highly experienced in such matters and can evaluate your potential legal claims on your behalf.  Contact us for a FREE case review.

What Your Children are Riding in: The Truth About School Bus Safety
When in Doubt: Yield to Pedestrians and Bicyclists