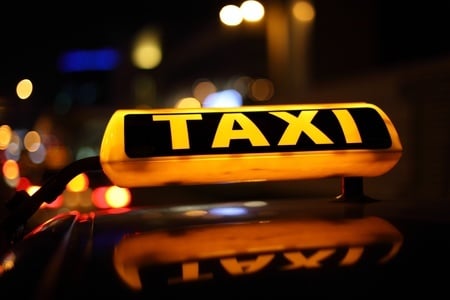 In West Virginia taxi cabs are not as prevalent as in other states, but the fact remains that if and when you travel in a taxi cab, there is always the possibility of getting in an accident. In fact, according to one report, the number of taxicab-related accidents is high – about 4,000-5,000 per year. In any given year, typically 71% or taxi accidents resulted in injury to passengers. 13% caused severe injuries to pedestrians and 7% harmed bicyclists. There are a number of substantive reasons why passengers that are involved in an taxicab accident are at higher risk for personal injury, including:

If you are injured in a taxicab accident, you must prove a number of things in order to substantiate your claim. As one article notes, “to recover from the taxicab company, a person who was injured in a taxi due to the driver’s negligence must prove that the driver was the company’s agent, servant, employee, or coparticipant in a joint venture.” This requires that the passenger demonstrate that the taxicab driver is part of a franchise that is regulated pursuant to the state safety and licensing laws, where “in many jurisdictions proof that the company holds the franchise, permit, or license necessary for operation of the taxicab will establish the company’s liability.”

The passenger is also required to demonstrate a particular ownership of the cab by the cab company. “Ownership of the taxi by the cab company is also relevant to establishing an agency relationship [and] ownership implies possession and control, and if the company has the right to possess and control the taxicab, it has means of exercising control over the taxicab driver [and] thus, if the company owns the cab and furnishes it to the driver, the driver is usually considered to be an employee rather than an independent contractor, and the company can be vicariously liable for the actions of its employees.” Accidents involving taxicabs tend to be fairly complicated and require the guidance of a legal practitioner to assist the injured victim appropriately navigate the various personal injury issues involved.

Colombo Law car accident lawyers are highly experienced in such matters and can evaluate your potential legal claims on your behalf.