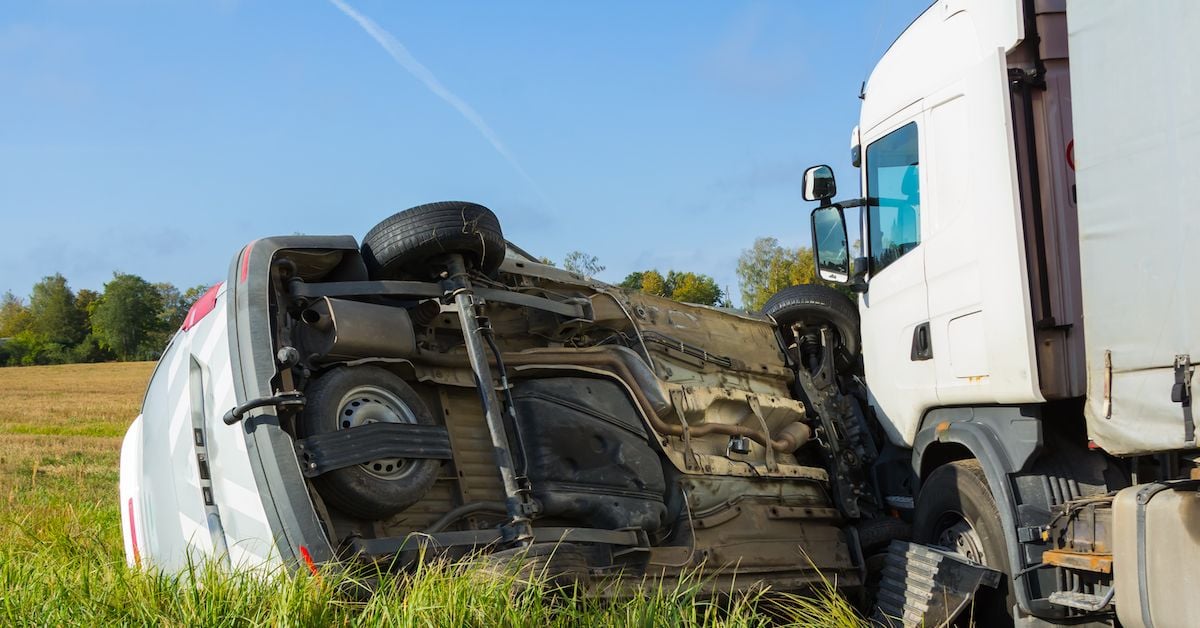 Two children are roughhousing and break a glass. The mother or father rushes in and asks, “Who did this?!” The children are quick to blame each other, both of them trying to avoid the consequences. “He did it!” “No, he did it!”

Well, unfortunately, this behavior doesn’t go away in the adult world, especially after something as serious as a truck accident. Children naturally try to avoid the consequences that come with the mistakes they make. Unfortunately, trucking companies that choose not to follow the rules and cause serious truck crashes are not much different.

You and your lawyer must build a strong, evidence-based case against the at-fault party responsible in order to receive the compensation you need and deserve. An accident victim who wasn’t responsible for the accident should never be left to deal with its repercussions without help.

But how do you know who, exactly, is the at-fault party? Or is there more than one party that shares the fault?

More Than One Party May Be at Fault for the Crash

When most people think of a truck crash, they automatically think of the driver behind the wheel. Oftentimes, however, the at-fault parties are the ones who put an unqualified driver on the road or forced the driver to drive long hours throughout the night that led to the crash. It could be the driver, but it could also be their employer, a truck or parts manufacturer, or even a loading company.

It takes a thorough investigation driven by evidence to be able to reconstruct why the accident happened, who was responsible, and what that means for you and your claim.

In addition, there are often many more parties involved in every truck shipment than people realize. For instance, the company that hires the truck driver is known as the “motor carrier.” According to the Federal Motor Carrier Safety Regulations (FMCSR), motor carriers are required to hire and train qualified drivers, make sure those drivers are given safe, well-maintained trucks, enforce hours of service regulations limiting the number of hours a driver can work and drive, and follow many more safety regulations designed to prevent crashes. Sometimes, a larger trucking company will accept a load, but then farm it out to an unqualified and dangerous motor carrier. This information can be discovered by requesting certain documents from the motor carrier like the Bill of Lading and Transportation Services documents. As experienced truck crash lawyers, the Colombo Law team knows the questions to ask and where to look to find all parties that are at fault in hurting you or your loved ones. To handle truck crash cases requires experienced and in-depth knowledge of the federal safety regulations.

Let’s take a closer look at some of the potentially liable parties to see how their negligence sometimes leads to truck accidents, along with what you can do if you’ve found yourself the victim of such an accident.

Reach out for a free consultation today and let’s get started.

We don’t typically consider driving a difficult task, but driving a truck day in and day out over vast distances is a lot of hard work. While it takes constant attentiveness and awareness, it can also get monotonous and tiring, which contributes to drivers making mistakes behind that wheel, including:

While the monotony of the never-ending highway is an understandable challenge, truck drivers are required to keep safety above all else at all times. After all, they’re driving massive vehicles that can cause a significant amount of damage, making it imperative that they stay attentive and responsible while behind the wheel. This is no time to take your eyes off the road.

The term used here is negligence, which means that someone – a truck driver, in this case – acted in a way that was irresponsible and out of line with how other truck drivers would act in their situation. Essentially, it means fault.

So, if you can show that the truck driver acted below the standards established by their profession and expected of them by law, then you’re well on your way to establishing fault and proving a case against the driver. Truck drivers are professional drivers, and they are expected to operate their 80,000-pound trucks in a professional manner. They are required by law to follow the safety rules set forth in the state Commercial Driver’s License (CDL) manuals and the FMCSR. This is why truck crashes are different than car crashes. If you have been in a crash with a truck, you need a truck crash lawyer that knows the CDL manuals and FMCSR regulations.

However, it might not be this simple. It could be that the driver wasn’t responsible at all, or that they were only partly responsible for what happened.

Consider the opening example of the two boys roughhousing. What if one boy admits that he was the one who knocked the glass over, but it was only because his brother was throwing a ball at his head and he tried to duck?

In this case, you could say that both boys, to an extent, were responsible. The same can be true in truck accident cases. Maybe it is true that the driver fell asleep at the wheel – a terrible mistake – but maybe he or she claims that it was because they were being overworked by their employer, the trucking company. Truck drivers are limited to 11 hours of driving in any 24-hour period. They must stop driving 14 hours after coming on duty – including waiting to pick up loads, getting gas, etc. In cases like this, a thorough review of the driver’s Hours of Service logs and comparison to fuel receipts, toll receipts, and onboard GPS systems can show whether a trucking company is pushing a driver to drive beyond the safe limits.

In these cases, the trucking company can also be held partly responsible for the accident.

Even a more egregious instance of driver negligence, such as driving under the influence of drugs or alcohol, could be partly because of the trucking company’s negligence. After all, they are expected to properly screen their drivers for any sign of past drug or alcohol abuse. If they failed to do so, then they might be partly responsible for the outcome.

Trucking companies are in the business of getting as much cargo from one point to another as cheaply as possible. Sometimes, this leads to them bending the rules – or outright breaking them. While they might get away with it sometimes, other times it contributes to serious accidents; they must be held responsible for their negligence.

Parts Manufacturer or Maintenance Liability for a Truck Accident

Most of us are familiar with parts defects in automobiles. You might have heard about the Takata airbag recall, where tens of millions of vehicles were recalled after it was discovered that the Takata airbags could explode when deployed.

Unfortunately, this kind of part defect happens with semi-trucks as well, which can lead to devastating damage and injury. After all, trucks are much heavier than an average passenger vehicle, meaning they’re harder to stop and they tend to cause much more damage on impact.

Defective parts could include:

If we find that there was a defect with one of the truck parts and this resulted in the accident, we might also find that the manufacturer of the part knew about the defect and did nothing – an act of negligence that would likely make them the responsible party for compensating you. Parts fail for three main reasons:

As with truck company negligence, it could be a matter of shared negligence. If, for example, there was a part defect with the hydraulics, but the problem should have been noticed by another party – such as a maintenance department – they might also be partially at fault for the accident.

It’s important to understand all of the different parties’ roles and how their negligence could have contributed to the accident. It’s rarely a clear-cut case, instead requiring a thorough investigation of everyone involved to determine which party – or parties – was responsible for the accident.

Most of us have, at some point, driven behind a truck with a heavy load and felt some nervousness. What if it wasn’t strapped down properly? What if one of the straps breaks?

Unfortunately, this happens, and it might not be because of the negligence of the driver, the trucking company, or the manufacturer. Instead, fault could lie with the loading company responsible for securely loading and strapping down the truck’s cargo.

While it is ultimately the truck driver and motor carrier’s responsibility to ensure that the load is properly secured before transporting the load on the public roadways, a company that performs the task of loading the trailer may share in the liability if the employees do not do their job properly – especially if the defect is hidden. Some loading companies or shippers place seals on their trailers such that the driver is not permitted to inspect whether the trailer is properly loaded. In those instances, the loading company may share in the liability.

After all, the consequences of such an error could be severe. If a piece of heavy equipment falls off a truck, impacting a vehicle behind it, the potential for serious damage and injury is high. Even if the object doesn’t impact a vehicle, a driver might swerve to avoid a fallen piece of cargo, leading to a collision with another vehicle or object. Improperly loaded cargo can also cause the truck to be unstable, causing it to tip or lose control.

Regardless, if the loading company was negligent in their duties, causing the accident, they should be held responsible for their actions. At the same time, you might be able to argue that others should not have let the loading company make this mistake, whether that be the driver or the trucking company.

What does all of this mean?

Ultimately, it means you need the help of experienced truck accident attorneys. When victims of truck accidents try to handle their cases on their own, it can be extremely overwhelming. You might expect the responsible party to raise their hand and accept the consequences, but this is very unlikely to happen.

Instead, you’ll probably see some finger-pointing, plenty of evasive explanations, and little clarity regarding who was at fault and who should be responsible for your compensation.

Meanwhile, you’re struggling with your injuries – both physical and mental – and trying to get your life back. But make no mistake, trucking companies and their insurance providers will do whatever they can to avoid responsibility and compensate you as little as possible.

That’s why we’re here. We help our clients cut through the difficult uncertainties around truck accidents to identify the responsible parties and hold them accountable. We’re on your side.

If you’d like to discuss your situation with us, don’t hesitate to reach out for a free, no-obligation consultation. When you meet with an attorney at Colombo Law, our attorneys can help you understand your situation, your options, and what to do next. Please give us a call at (614) 362-7000 for a free consultation in the Columbus area.